In an era where health and well-being are increasingly valued, Consumer Genetics, Inc. brings you the CaffeineGEN™ Test. Recent research suggests that a slow metabolizer of caffeine is at a higher risk of a nonfatal heart attack compared to a person who metabolizes caffeine rapidly. Caffeine has also been linked to increased risk of miscarriages and decreased fertility in women who are slow metabolizers.

The CaffeineGEN™ test is a simple, accurate genetic test that will tell you if you have the fast or slow caffeine metabolizing gene. All you need to do is collect a simple cheek swab sample in the comfort of your home and just days later you will be ready to make positive changes in your life based on your personal genetics. 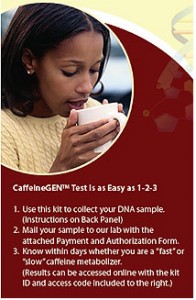 By knowing your genetic makeup, you can adjust your daily caffeine intake accordingly and manage your overall well-being. Why guess if you are putting yourself at risk the next time you drink coffee, eat chocolate, or take cold medicine? Ease your mind and find out with the CaffeineGEN™ test!

Who uses this test? Heavy coffee drinkers or anyone else who would like to take advantage of the most recent scientific findings to make positive changes in their lifestyle.

Caffeine is a chemical compound which acts as a stimulant when consumed. Many of us are aware of the effects of caffeine on our bodies as we try to wake up in the morning, or stay awake at the end of a long day. However, for individuals who are slow metabolizers of caffeine, excessive caffeine consumption (more than 2-3 cups of coffee or 200 mg of caffeine per day) can have negative consequences on their bodies including an increased risk of nonfatal myocardial infarction (heart attack).

Caffeine and a healthy heart:

In the March 2006 issue of the Journal of the American Medical Association, Cornelis et al. published their findings on fast and slow caffeine metabolizers. Their study followed nearly 4,000 individuals, half of whom had experienced a nonfatal myocardial infarction (heart attack). After the researchers adjusted for variables such as food consumption, physical activity, and socioeconomic status, they found that participants’ genotype at the CYP1A2 gene had a significant impact on the health of the heart. The study concluded that slow caffeine metabolism was associated with a higher risk of nonfatal heart attack.

In the April 2005 issue of the Journal of Molecular Human Reproduction, Sata et al. published an article that discussed the effects of caffeine in pregnancy and fertility. Their study demonstrated that women with the slow gene variant had an increased risk of recurrent pregnancy loss and reduced fertility when consuming 100-299 mg (1-3 cups) of caffeine daily. Yet, women who had the fast alleles did not have any known negative effects when consuming the same amount of caffeine daily.

Does the CaffeineGEN™ Test require a blood sample?

No, it does not. The CaffeineGEN™ Test uses DNA from your cheek cells that is collected by using a simple DNA Cheek Swab. With your DNA, well use PCR (polymerase chain reaction) analysis and DNA sequencing to determine your genotype.

Are there any precautions prior to taking my cheek swab sample?

Yes. Mouthwash, toothpaste, and/or other antiseptic commercial products used for oral hygiene should not be used at least 30 minutes prior to sample collection. To cleanse the mouth before collecting your DNA sample, drinking or rinsing the mouth with water is recommended.

Are there any risks involved when taking the CaffeineGEN™ Test?

There are no risks involved since the process is safe, non-invasive, and simple to do. Also, the result of the DNA analysis is kept confidential and is not shared with third parties (i.e. health care providers, insurance companies, etc.) without the consent of the individual who provided his or her DNA sample.

Is the CaffeineGEN™ Test accurate? 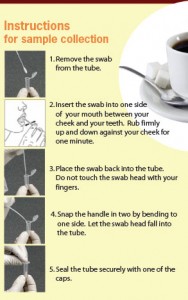 The CaffeineGEN™ Test is 99.9% accurate because of our high quality control standards, and outstanding scientific methodologies implemented. The scientists at Consumer Genetics, Inc. use PCR analysis and DNA sequencing to determine a persons genotype for caffeine metabolism. In the event that the quality of the DNA sample or the procedure does not meet our standards, we will ask for a new sample.

Is the CaffeineGEN™ Test covered by health insurance?

The CaffeineGEN™ Test is currently not covered by health insurance providers.

Is the CaffeineGEN™ Test regulated by the FDA?

The CaffeineGEN™ Test is not under the jurisdiction of the FDA.

I dont drink caffeinated beverages, so do I still need to take this test?

Although you dont drink caffeinated beverages, you might be consuming caffeinated foods or prescribed caffeinated medications that you are unaware of. Therefore, taking the CaffeineGEN™ Test to determine your genotype for caffeine metabolism is important in many situations. While your diet or medications may change, your genetic make up is permanent, therefore this affordably priced test provides life-long knowledge.

If I reduce how much caffeine I consume, does that mean I reduce my risk of heart attack?

Cardiac health is a very complex issue. Caffeine is just one of many variables that have been linked to increased risk of heart attack. The food you eat, the amount of physical activity you engage in, and other genetic factors also influence your risk of heart attack. The Cornelis et al. study, which the CaffeineGEN™ Test is based on found that after adjusting for these other variables, ones caffeine consumption and genotype had a significant effect on the risk of nonfatal myocardial infarction. If you are a slow caffeine metabolizer, reducing your caffeine consumption is just one small step towards leading a healthier lifestyle. Consult with your doctor about other aspects of your lifestyle that may affect your risk of heart attack. You should always consult your doctor before making drastic changes to your diet or lifestyle.

Can I share my CaffeineGEN™ Test results with my health care provider(s)?

Most definitely, you can share your caffeine genotype with you own private health care provider(s). If both you and your physician know that you are a slow metabolizer of caffeine, then your physician can prescribe medications that do not contain high doses of caffeine.

Is my CYP1A2 gene related to caffeine withdrawal?

Is my CYP1A2 gene associated with caffeine tolerance?

The CYP1A2 gene is not associated with caffeine tolerance but only with the breakdown of caffeine.

Individuals who consume caffeine regularly will synthesize more adenosine receptors than those who occasionally consume or abstain from caffeine. As the body becomes more sensitive to the large amounts of adenosine receptors, cravings for caffeine increase. Caffeine tolerance develops to balance the increased consumption, but these effects are not influenced by the CYP1A2 gene.

What is the lethal dose of caffeine in humans?

Now that I know my genotype, how can I use this information to my benefit?

Consumer Genetics, Inc. provides our customers with accurate personal genetic information which can be used to make simple lifestyle changes to improve overall well-being. If one is a slow metabolizer of caffeine, then one should decrease the amount of caffeine intake to reduce the risk of nonfatal heart attacks. Moreover, females who are pregnant or plan on being pregnant and are slow metabolizers of caffeine should cut back on consuming caffeine to lower their risk of miscarriages and to increase fertility.

If I am a slow caffeine metabolizer, can I still consume caffeine?

Yes, you can still consume caffeinated food and beverages up to 200 mg per day which is equivalent to 2-3 cups of coffee per day .

According to the Cornelis et al. study, people who have the slow caffeine metabolizing gene can still enjoy caffeinated food and beverages so long as their caffeine consumption doesnt exceed more than 200 mg per day or more than 2-3 cups of coffee per day.

If my heart beats faster, and I fill jittery after consuming caffeine, does that mean I am a slow metabolizer of caffeine?

An individual who has the slow caffeine metabolizing gene cannot breakdown caffeine as quickly as a fast caffeine metabolizer. The fast or slow rate of caffeine breakdown has no direct effect on the heart rate since these side-effects are attributed to the chemical properties of caffeine. It is caffeine alone that is responsible for the rapid heart rate through a series of biochemical steps. Once the caffeine is absorbed, it will induce the release of epinephrine or adrenaline that stimulates the sympathetic nervous system, which in turn increases blood pressure and heart rate. On average, caffeine is readily absorbed by the body after it has been consumed regardless of whether one is a fast or a slow metabolizer of caffeine.

I am able to drink 6 cups of coffee per day and feel fine. Does that mean I am a fast metabolizer of caffeine?

If I am a fast metabolizer of caffeine, does it mean I can drink up to 6 cups of coffee per day?

As stated in the Cornelis et al. research study, a person who is a fast metabolizer of caffeine can drink up to 6 cups of coffee a day and have no effects. However, bear in mind that the lethal dose is 2 grams of caffeine per day.

When making any dietary decision, one should seek proper medical advices from a health care provider(s) before making drastic changes in lifestyle. The CaffeineGEN test is intended to serve as an educational tool, not as a precursor for drastic lifestyle changes.

Yes. The physical and chemical properties of caffeine are the same whether it is from coffee, tea, soft drinks, energy drinks, or other caffeinated foods. It is the amount and the source of caffeine that differs from one caffeinated product to the next. Regardless, caffeine is caffeine.